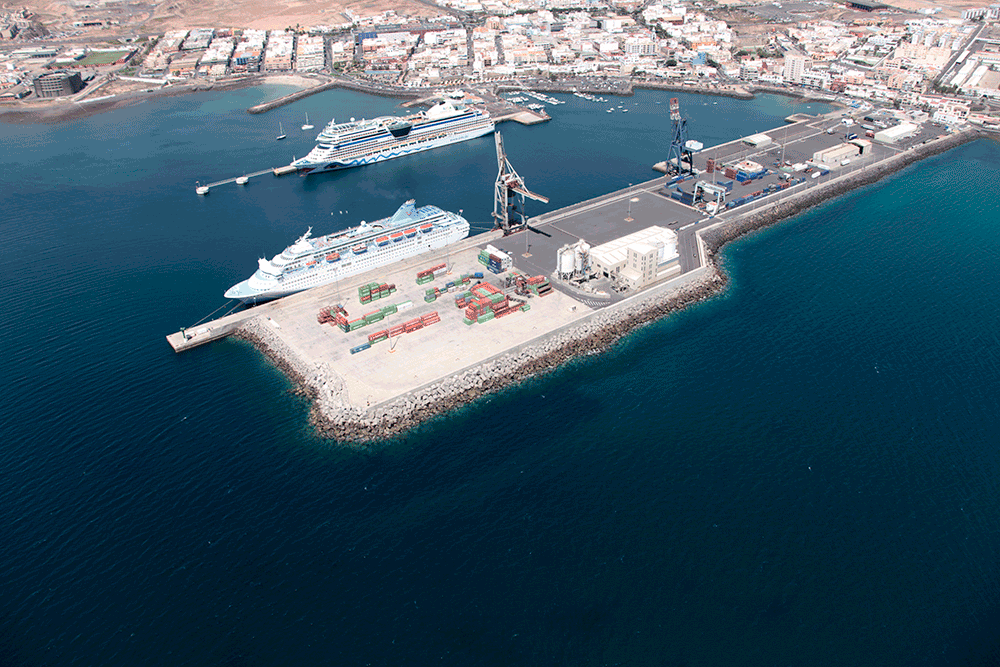 The harbour and port of Puerto del Rosario in Fuerteventura (Canary Islands) is the island’s top port area and is located in the capital, Puerto del Rosario (13ª33'W-28º58'N). It has a berthing line of more than 1.3 kilometres, with depths ranging from three to twelve metres. It is currently undergoing major building works to further boost its capacities as a logistics and nautical centre and as a home port for cruise ships.
During 2018 this port was a stopover for 891 ships, most of them merchant vessels, with total gross tonnage of 16,406,372 tonnes.
Its main traffic is general goods. This port was historically important for exporting horticultural products, mainly tomatoes. However, in recent decades the island’s tourist industry has led to spectacular traffic growth
and it now registers 1,274,544 tonnes per year and moves 38,462 TEUs. The Port of El Rosario is also noteworthy for passenger traffic. In 2018 274,610 people passed through its quays, 233,520 of them as cruise ship tourists.

Harbour for pleasure boats
This recently built new facility is devoted to recreational nautical activities and is located near the cruise ship dock and the recently built Los Pozos Beach.
This marina comprises five jetties, four of them with loading bridges, encompassing a total of 254 mooring points, distributed by ship lengths ranging from 6 to 12 metres, as well as a 120-metre berthing line for boats in transit.
The harbour facilities supply the ships with fuel, power and water.