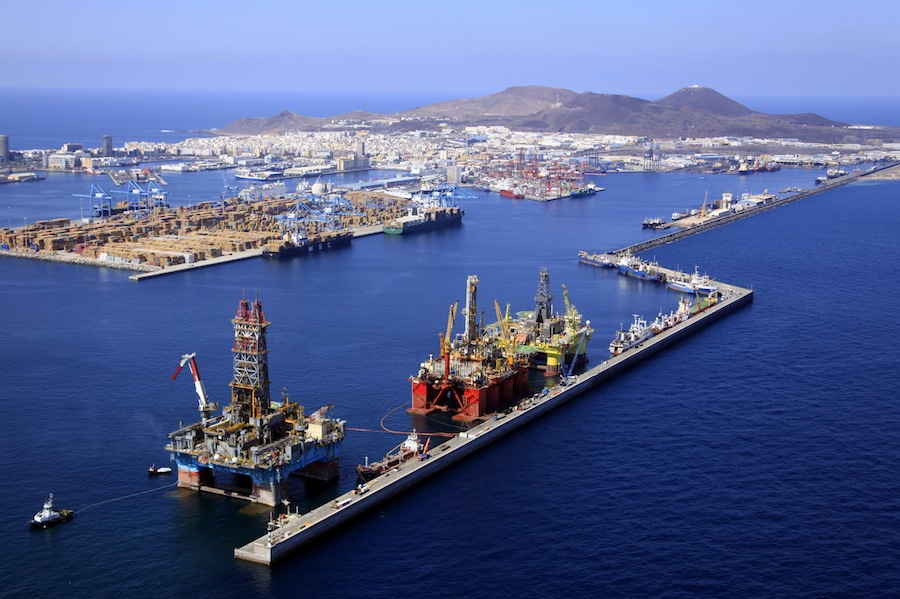 The exceptional geographic location of the La Luz Port, the Port of Las Palmas in Gran Canaria, a bridge between Europe, Africa and America, has made it the most important port precinct in the Mid-Atlantic. It is located in the northeast of the island of Gran Canaria (15º25'W-28º09'N). Thanks to its size, its infrastructures and the variety and quality of the services it offers. This strategic situation has consolidated this port as a first-class logistics hub, with more than thirty maritime lines connecting with more than 180 ports around the planet. The La Luz Port in Gran Canaria is the largest port in the Canary Islands and one of the most important goods distribution links in Spain. It currently has almost 16 kilometres of berthing line, distributed among all its docks, with depths ranging from 3 to 45 metres.

Centuries before its construction was started in 1883 in its current location, this port was already used by Christopher Columbus as a bay and refuge for his boats heading out to discover America. Over time it has become a commercial port providing quality services in cruise ships, bunkering, fishing, containers, naval repairs, freight and passengers..It also has a free trade zone and border facilities for the control of goods. Over the course of 2018, 13,241 ship stopovers were registered, 900 more stopovers than in 2017 (7.29% more). Total freight traffic exceeded 23.3 million tons.

Among the advantages offered by this port are its historic relationship with shipping companies from around the world, ties that have been built up over the years. Also the availability of state-of-the-art facilities and the flexibility and versatility of its services. All this has contributed to making the La Luz Port in Gran Canaria a standout logistics centre for containers and other commercial cargoes on an international scale and as a service station for the ships crossing the Atlantic routes, mainly in the provisioning of ships, fishing, naval repairs (specializing in the offshore sector) and in supplying fuel. In this last segment of activity, this is the leading port in Spain and is already known as the "Atlantic's fuelling station". During 2018, 2,330,190 tonnes were supplied. Looking ahead, we are already working on facilities and means for supplying Liquefied Natural Gas to ships.

As for containers, one of the most relevant activity indicators, the La Luz Port in Gran Canaria recorded the movement in 2018 of 1,034,063 units, yet another year exceeding the one-million figure. Another aspect in which this port has considerable scope for future development is the cruise sector. Around 674,000 cruise passengers passed through its docks, an increase of almost 5% compared to 2017. To facilitate the expansion of this sector, projects have been launched to increase the berthing line at the Passenger Dock and for the construction of a new cruise station.

Moreover, the La Luz Port in Gran Canaria stands out in the international arena as a solidarity port. The Red Cross and Red Crescent and the UN World Food Programme keep warehouses here from where humanitarian aid is distributed to African countries that need it. The location of these bases was chosen for its strategic position, availability of excellent services, dense network of maritime and air connections and favourable customs regulations.

The La Luz Port has traditionally enjoyed free trade conditions, perfected through the Canary Islands Economic and Fiscal Regime (known by its Spanish initials ‘REF'), a special tax status within the European Union.

The Small Ships Dock of the La Luz Port in Gran Canaria is the largest in the Canary Islands and a transit area for transatlantic sailors from the five continents. Its capacity is 1,359 berthing points. Of these, 1,177 are managed directly by the Las Palmas Port Authority. The rest is in licensing arrangements. The percentage of berths in transit (associated with the Atlantic Rally for Cruisers regatta - ARC) is 25-30%.

The marina of the La Luz Port in Gran Canaria has undergone important reforms and improvements in recent years. Among the latest works carried out is the installation of a new network of Active Fire Protection, the replacement of old pontoons, the installation of more pontoons for berths in the vernacular lateen sailing area and the improvement of the development area in the southern part of the pier, creating a greater yield of parking places. Additionally, this year a public tender will be called for the installation of new nautical premises, thus expanding the provision of services and the professionalisation of this port area devoted to sailing.

These actions will be followed by others that will have a huge impact on the modernization of the Marina. The Investment Plan for the 2018-2022 period includes the demolition of the old Red Cross building to create an open space with a landscaped area and a sports space in this zone; the urban development of the Small Boats Dock, which includes the improvement of the whole development site, surfacing all the roads, widening sidewalks, rearranging parking places and reorganising green areas; plus adapting pedestrian access ramps to the dock, thus improving accessibility from the city centre to the marina. The repair facilities, the most comprehensive in the Canary Islands, are equipped with several specialized workshops and a full maintenance service.

Plans are also underway to enlarge the marina. The widely demanded enlargement of the Marina will be favoured with the lengthening by more than 400 meters of the Reina Sofía dyke of the La Luz Port in Gran Canaria. The dock will be more protected. This will reduce the cost of the necessary protection works for an extension of the dock, which may make it more attractive for private investors.

There are many initiatives that will mark the change of course which the Marina will undergo. Its management will be made easier by the implementation of new programmes.

Computer experts needed for improving and modernising the management and for creating an exclusive website for the dock.

Among the immediate objectives, the Las Palmas Port Authority seeks to attract new regattas in addition to the consolidated ones: the Atlantic Rally for Cruisers (ARC) and the MiniTransat.