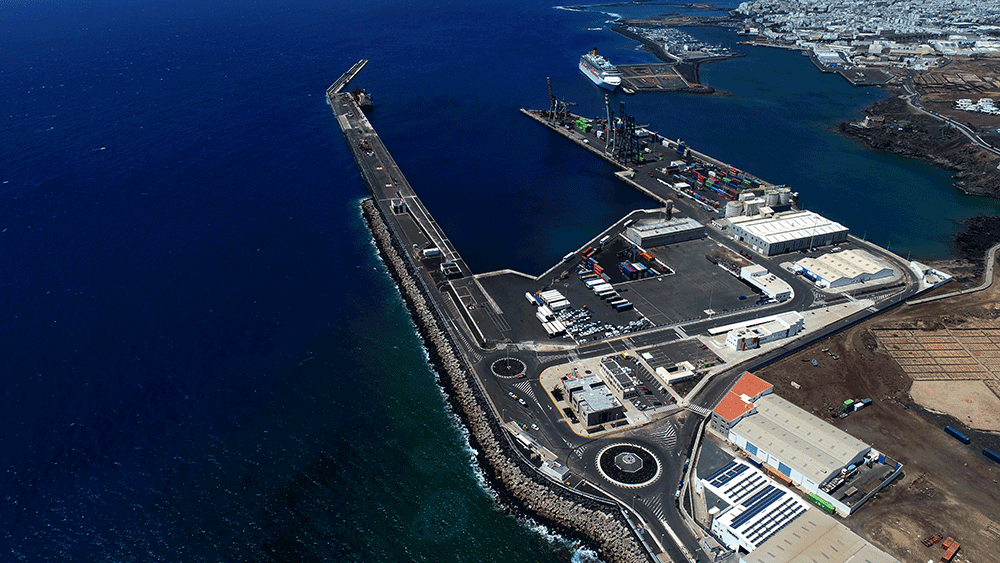 Situated in Lanzarote’s capital, Arrecife (13º318’W-28º580’N), this port started life essentially as a fishing harbour. Over time, and given the extraordinary growth of the tourist industry on the island, it has become the Canaries’ third goods port.

The Port of Arrecife in Lanzarote is a veritable economic development pole for the island and will acquire even more importance over the next few years, with new plans for using the port spaces, basic enlargement projects and implementation of special development plans for its precinct. The port’s enlargement projects are associated with improvements to its infrastructure for containers, tourist cruise ships and nautical sports. In total, more than 3 kilometres of berthing line will be made available.

Lanzarote is situated at a distance of 68 nautical miles from the African continent and is in a key geostrategic position, on the route between the European, African and American continents. This location, together with its inland economic development, has set it up as a port enclave for container traffic. Every year, more than 65,000 TEUs pass through its terminal, which already boasts three gantry cranes.

In cruise ships, this port receives each year around 423,000 cruise passengers, making this the most sought-after port by tourists and the second port in the Canaries in cruise ship reception. Once the new infrastructure works are completed, its docks will have the capacity for receiving up to eight ships simultaneously and for becoming a home port.

As for its fishing activity, Lanzarote port is noteworthy for its proximity to the rich African fishing grounds and for its infrastructures. It records annual movements of 1,600 tonnes of fresh fish and 5,500 tonnes of frozen fish. It has an ice factory in place, situated on an area of 3,500 square metres, supplying the European artisan fleets that operate in the nearby African fishing grounds. Its storage capacity is for as much as 80 tonnes of ice.

This port has a plant for processing farmed fresh fish, with maximum production capacity of 12,000 tonnes of bass and bream per year, of which 95% is exported. For this purpose it has an area of 320,000 square metres and 33 cages located in waters boasting some of the highest quality in the world. In addition, situated right in the heart of the Port, it has an internationally renowned maritime-fishing training centre.

Lanzarote’s Arrecife Port provides inspection services through a Border Inspection Post and an authorized Customs Compound. These centres are managed by the Las Palmas Port Authority and the Lanzarote Chamber of Commerce.

The Marina of Arrecife Port in Lanzarote has 360 berths afloat and 72 dry-dock places. It services boats of lengths ranging from 4 metres to 60-metre superyachts. It boasts a modern leisure, restaurant and retail area, with more than 4,000 square meters of open terraces and with Charco de San Ginés as a backdrop. It also has a Sailing Club.